Looking for a more affordable option when buying an Xbox Series X or Xbox Series S? Then you may want to consider Xbox All Access.

Xbox All Access looks set to change the way gamers buy or upgrade new Xbox consoles – offering players the option to pay for their new console via a monthly payment plan rather than a one-off payment, and with Xbox Game Pass Ultimate bundled in for the money.

It was August 2018 when Microsoft first announced the launch of Xbox All Access, a service that – at the time – was exclusive to the US and only applied to the Xbox One S or Xbox One X console. Now though, the model is being rolled out to 12 countries (with more to come in 2021) and will allow gamers to upgrade or purchase a new Xbox Series X or Xbox Series S from launch – with an Xbox One S plan available right now.

But how exactly does Xbox All Access work, is it cheaper in the long run, and – most importantly – is it really the right payment option for you? We've put together this handy guide to tell you everything you need to know – including how to sign up and save cash on the Xbox Series X price.

Xbox Series X pre-order pages are going live today as you read this, as well as those for the cheaper and less powerful Xbox Series S. That means you can pre-order your Xbox Series X via Xbox All Access today.

UK customers can join Xbox All Access, and pre-order their console, at either Smyths Game, or Microsoft, right now. But, we warn you, stock is pretty much non-existent at the time of writing.

Xbox All Access is a subscription service that sees you pay a monthly cost towards your Xbox console, rather than paying a huge amount of money up front. It's a bit like a mortgage – without the interest – or the way we pay for smartphone contracts.

While the Xbox One S is currently the only console available right now, the Xbox Series S and Xbox Series X will be available to buy this way when they launch on November 10 (though pre-orders are available).

The subscription service not only includes your Xbox console, but also bundles in 24 months of Xbox Game Pass Ultimate, which grants access to cloud streaming via Project xCloud, over 100 Xbox games via Game Pass, over 60 EA games via EA Play and first-party Xbox titles from launch day – including the likes of Halo Infinite and soon games from Bethesda. All in return for a fixed two-year contract. The Game Pass subscription applies to the platform on Xbox One, Xbox Series X/S, and PC.

Considering how many games Xbox Game Pass Ultimate grants access to, and that the price of the console plus the subscription service comes in roughly just $10 more than the subscription service costs alone, Xbox All Access looks like it could be a more affordable option for heavy-use gamers who don't want to pay an upfront cost. However, All Access could potentially work out to be a more expensive option in the long run for those unlikely to use these add-on services.

The amount you pay per month depends on which console you decide to 'subscribe' to.

The Xbox One S bundle will set you back $22.99 / £19.99 / AU$27 per month, with a fixed contract of 24 months. This bundle includes 24 months of Xbox Game Pass Ultimate and an 18-month console upgrade option. That means that you will be eligible to upgrade to a new Xbox Series X or Xbox Series S but only after 18 months, and there's some important things to know if you decide to upgrade (which we go into below). Typically an Xbox One S would cost around $299/£249/AU$399 upfront.

There is no upfront cost and 0% APR, either. You will, however, start being charged interest if you miss two consecutive payments, so we don't recommend signing up unless you have somewhat stable income (or are willing to foot an increased bill down the line if you don't make every payment).

We cannot emphasize this enough, Xbox All Access is a contract and missing payments could negatively affect your credit score. It's not a subscription service to be entered into lightly.

How to upgrade your current Xbox All Access subscription

Here's where things get a bit complicated. If you're a current Xbox All Access subscriber you can upgrade your subscription to an Xbox Series X or Xbox Series S bundle, but there's some important information to note first.

Firstly, while current Xbox All Access subscriptions specify that you can't upgrade your console for 18 months, Microsoft has waved that stipulation in the US so you can sign up for an Xbox Series S or X subscription when the pre-order window opens on September 22.

However, to move onto a new subscription service before the 18-month window (for Series S or X) you will have to apply for a new Xbox All Access credit agreement, enter a new 24-month contract with Klarna and you'll also only be able to do so with the same retail partner where you joined the program.

For those who haven't got this option (outside the US), you will still need to arrange a new credit agreement, sign up for a new 24-month contract and upgrade via the same retailer after the 18 month minimum window. After this minimum window, you won't have to continue paying for your current console, but you will need to trade the current console in. However, if you purchased an Xbox One X with Xbox All Access before December 31, 2019, then you only need to meet the equivalent of 12 full payments.

There is no upgrade fee for customers upgrading from an Xbox One S or Xbox One X to the Xbox Series X or Xbox Series S. However, customers upgrading from an Xbox One S All-Digital Edition console will be charged a £15 'Microsoft upgrade fee'. Also, it's worth noting that if you only pay for your current subscription up to the minimum window, then you'll have to trade in that console (and the provided peripherals) to upgrade, but if you make your full payments then you get to keep the current console.

However, if you choose to upgrade and don't return your trade-in kit, then your Klarna account will be paused for 30 days before returning to an 'active status'. You will then have to pay of the total of your remaining balance, with the delayed payment being collected at the same time as your next normal monthly repayment.

Before you sign up for Xbox All Access there are some crucial details to be aware of:

If you return the console, you are still responsible to pay for Xbox Game Pass
Xbox All Access is subject to the Microsoft Store standard return policy. This means your chosen console has a 30-day return policy. However Xbox Game Pass is not returnable and is non-refundable. It's also worth noting you can't revert Game Pass Ultimate back to a standard Game Pass package once you're signed up – nor can you cancel it to reduce payments.

Can I cancel Xbox All Access?
The short answer is no, when you purchase the bundle you are signing up for a 24-month contract – which isn't to be taken lightly. But check with the retailer you purchase from.

It's yours to keep after the two years
Signing up for Xbox All Access apparently means you own the console and the 24 month Xbox Game Pass and Xbox Live Gold memberships outright upon purchase. But, in reality, until you make all your payments, it's not really yours – which is why Microsoft asks for your current console back when you choose to upgrade before the minimum payment time.

Microsoft Limited Warranty only covers the Xbox console for one year (90 days for the controller and accessories)
If it malfunctions after that then you are responsible for any repair costs and monthly payments will continue until the remaining balance on your Dell Preferred Account is paid in full.

Outstanding balances at the end of 24 months are subject to APR
Rates range from 19.24% to 29.99% variable APR. The Minimum Interest Charge is $2.

A full credit search needs to be conducted
To sign up for Xbox All Access you need to sign up for a credit agreement with the relevant financier for your region In the UK, this is Klarna Bank AB, who will run a full credit search on you. To apply through Klarna, you must be a permanent UK resident, and be at least 18 years of age.

"When you apply for Financing with Klarna, Klarna will make a full credit search with credit reference agencies who will supply credit information," the Xbox All Access FAQs state. "The agencies will record details of the search, which can be seen on your credit file, whether or not credit is granted. This record will also be visible to third parties and may affect other organizations’ future decisions on whether or not to provide you with credit. For any questions relating to the credit check process, contact Klarna’s customer support team. Missed and late payments will be reported to credit bureaus and could impact your credit score."

In the US, Xbox All access finance is provided by Citizens One, so you need to open a Citizens One Line of Credit. Citizens One has no fees, but late payments may be reported to the credit bureaus. Like with Klarna, a full credit check will be run before your line of credit is approved.

Xbox All Access is currently available in the US, UK, Australia and New Zealand, but Microsoft has said it is rolling out the service to eight more countries in "Holiday 2020" – with more countries to come in 2021.

Here are the countries and retailers that will have Xbox All Access come "Holiday 2020":

Xbox All Access doesn't explicitly come with games, but the inclusion of 24 months of Xbox Game Pass Ultimate in the bundle sees you getting access to loads of top Xbox titles.

Xbox Game Pass Ultimate grants access to over 100 Xbox games via Game Pass, some of which are available to play on Android mobile devices come September 15, thanks to Project xCloud. Game Pass titles include the complete Gears of War, Forza, and Halo series', plus much more.  In addition, you'll have access to the biggest first-party Xbox titles from launch day, which will include the likes of Hellblade 2 and Halo Infinite. Come "Holiday 2020" EA Play will also be included in the subscription service, granting players access to more than 60 of EA's top games including FIFA 20, Need for Speed and The Sims; while Microsoft's recent acquisition of Bethesda means the likes of Skyrim and Fallout will also be coming to the service. 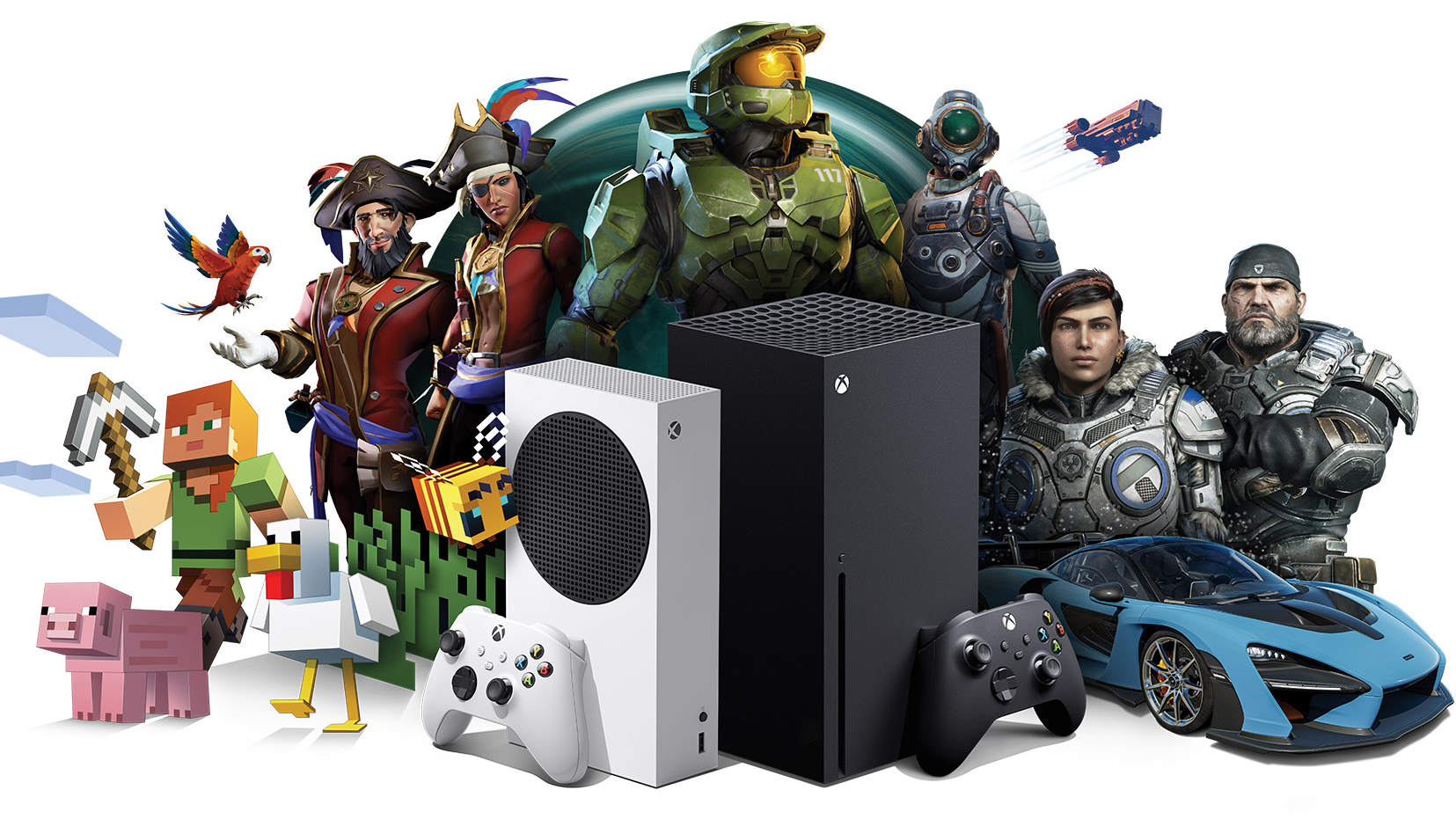 Previous ArticleHuma Qureshi on being named in sexual harassment allegation against Anurag Kashyap: Angry at being dragged into this messNext ArticleXbox Series S pre-orders live now: where to buy the cheap Xbox Xbox Series S