The Last of Us 2 guides

The Last of Us 2 gate codes: how to open the main gate

The Last of Us 2 safe codes: all locations and combinations revealed

The Last of Us 2 training manuals: all skill branch locations

The Last of Us 2 Strange Artefact: how to find the Easter Egg collectible

The Last of Us 2 ending explained: what it all means

When I called The Last of Us 2 "the greatest game of this generation" in my review, I truly meant it. What proved difficult in that review was trying to explain why without points coming across as reductive. After all, the game hadn't released yet and, as per Sony's request, those reviewing the game were under strict instructions not to share any potential story spoilers which, frustratingly, are the most interesting and poignant aspects of the game.

The Last of Us 2 explores virgin territories of game narrative, making you, by turn, a co-protagonist in her adventure, and a victim of her actions.

What results is a sequel that begs to be talked about… screamed about, whatever your opinion. The minute I put down the controller after finishing the game I was at a loss, because I wanted to talk to everyone about it – but couldn't. I can't remember the last time I was so excited to delve into discussions about every aspect of a game, to see how my experience lined up with those of others, and to exchange theories on underlying themes.

But now The Last of Us 2 is out, and I can finally talk about the game that put me through the emotional wringer, left me in a puddle of tears as the credits rolled, and turned my favorite protagonist into the bad guy. Warning: Major spoilers for The Last of Us 2 ahead.

The fall of Ellie

The Last of Us 2's story is a compelling and beautifully crafted masterpiece. But, most importantly, it was a risk. Where The Last of Us tentatively explored the moral gray area of Joel's actions, the sequel jumps in with two feet.

At first, The Last of Us 2 seem pretty cut-and-dry. Ellie sets out on a revenge mission in pursuit of Abbey, who ruthlessly murdered Joel. Having built up a fondness for Joel, I too am heartbroken, and it's clear that Abbey must be some sort of evil monster who just wants to terrorize happy families. And the WLF, the group to which she belongs, must be just as bad – because Ellie and Joel are the good guys, right?

So I go along with Ellie's quest, I grimace when she cuts a WLF soldier's jugular, and shriek when she kills a dog or two. But then the people around her start to question Ellie's violent methods – and, by extension, question my methods. Despite my concerns that Ellie is going over the top, I reassure myself that it's a game, and Ellie is the good guy, and instead opt to shove that guilt right back down and strangle a lady playing a PS Vita – because she probably deserved it, right? Bloodsucking monster.

I find myself doing increasingly convoluted mental gymnastics to justify Ellie's behavior. While up until now I've chalked most of her actions down to grief and trauma, things get more difficult when she makes Nora talk.

Nora, a definitely evil WLF member, is on Ellie's list of people who were accomplices in Joel's death and, therefore, need to die. When Ellie finds Nora in the WLF hospital, Nora says some pretty ugly things about Joel and refuses to play ball regarding Abbey's whereabouts. At this point, I hoped Ellie would maybe just kill her and be done with it, but things take a much darker turn. I'm forced, as Ellie, to keep hitting a crying Nora with a pipe, watching the blood splatter on the screen and seeing only the unravelled look on Ellie's face. And then Ellie makes her talk.

It's at this point I begin to realize that maybe I'm not batting for the right team here. The angsty teenage Ellie I knew is gone, and this angry, vengeful woman has taken her place. But Ellie is pretty beat up about having tortured Nora, you know, maybe she'll stop now. But she doesn't stop… and ultimately, Ellie kills a lot more WLF members, gets her friend killed, and murders a pregnant woman in pursuit of her revenge.

Because the unpalatable truth is, Ellie isn't the good guy.

This becomes evident when I take on the role of Abbey halfway through the game, and relive Ellie's journey through the eyes of her nemesis. As I awkwardly speak to those that I know I ultimately murdered as Ellie, it becomes clear that Abbey killed Joel as revenge for Joel killing her father, and I begin to see the parallels between Abbey's life and Ellie's. Abbey and Ellie essentially have the same goal, which is to seek justice for the death of a loved one. I find myself feeling empathy for a group I've spent most of the game killing, and suddenly what has been a neat black and white distinction between the 'good guys' and the 'bad guys' becomes considerably grayer.

The exploration of this gray area is something we've rarely seen in games. While we've sometimes seen games explore the troubled backstory of the antagonist, stepping into their shoes is something else entirely – and it's what Naughty Dog forces you to do.

While I found myself questioning Ellie's actions, I also found myself questioning the entire 'us' versus 'them' vein of The Last of Us series. We've always seen through Joel and Ellie's eyes, with the Fireflies deemed the baddies in The Last of Us because their intentions are not those of our protagonists, and we never question that. But, in reality, each group is trying to survive, and each has questionable methods for doing so – and if you start to see the world through the eyes of any group that holds strong beliefs, then anyone opposed to those beliefs becomes the bad guy.

While Abbey and the WLF view all Scars as super-religious cultists, Abbey's relationship with runaway Scars Lev and Yara proves that not every member of a group should be painted with the same brush. The Scars view the WLF as torturers and murderers, and ultimately want to be left to their own devices; but, when it boils down to Abbey having to choose between her people, the WLF, and the opposing Scars, she realizes that people are more than their labels, opting instead to kill WLF members to protect Lev, and telling her ward, "you are my people".

It's a bold move on the part of Naughty Dog, to make players face how uncomfortable it truly is when you see your 'enemy' as a human as opposed to a target. When you do so, it turns everything you know upside down, and I started to feel guilty each time I killed someone in the game – gradually opting to use avoidance tactics to get around having to actually jump into combat with anyone.

The truth is, we as players are used to being biased. Rarely are we challenged to step outside our comfort zone and confront the possibility that the protagonist we're playing as could, in fact, be the bad guy. It's the same reason we see the likes of Breaking Bad's Walter White and Mad Men's Don Draper as the good guys – because we want to be on the right side, and people aren't as cut-and-dry as being inherently 'good' or 'bad'. All humans have their flaws, and it's a testament to Naughty Dog's nuanced storytelling that we're faced with that uncomfortable truth in The Last of Us 2.

I finished The Last of Us 2 not knowing where I stand with its characters. I went into the game batting for Ellie and hating Abbey – but, by the end, things had changed in dramatic and unexpected ways.

Watching Ellie unravel is like watching a friend make life-altering bad choices – you can see the cost of what they're doing, but they're blind to it. It's incredibly painful to watch, to the point that you almost want to step away for your own sake – and at times, I wanted to reach into my TV and shake some sense into Ellie.

But it's never quite that simple. As a player, I've watched Ellie grow into the young woman she is; I know the hardships that have changed the trajectory of her life, and I can empathize with the emotional and psychological toll her experiences have taken on her (it's strongly hinted at that Ellie is suffering from PTSD).

While I found myself frustrated by Ellie's inability to let go of her vendetta, and by what she lost as a result of it, the Last of Us 2's ending shows that there's hope for Ellie yet. Flashbacks of Joel remind our heroine of who she really is, and deep down she knew that having her revenge wouldn't bring back Joel – and nor would it assuage her own guilt over how her relationship with Joel had become strained at the time of his death.

Where Ellie will go from here remains to be seen. While she no longer sits on the pedestal we once placed her on – and rightly so – it's refreshing to see a game truly explore the gritty, dark aspects of a beloved character's psyche, risking alienating fans who just want their freckled, smart-mouthed teenage protagonist back.

But what's for damn sure is that the Ellie we once knew is gone, and she's probably never coming back. 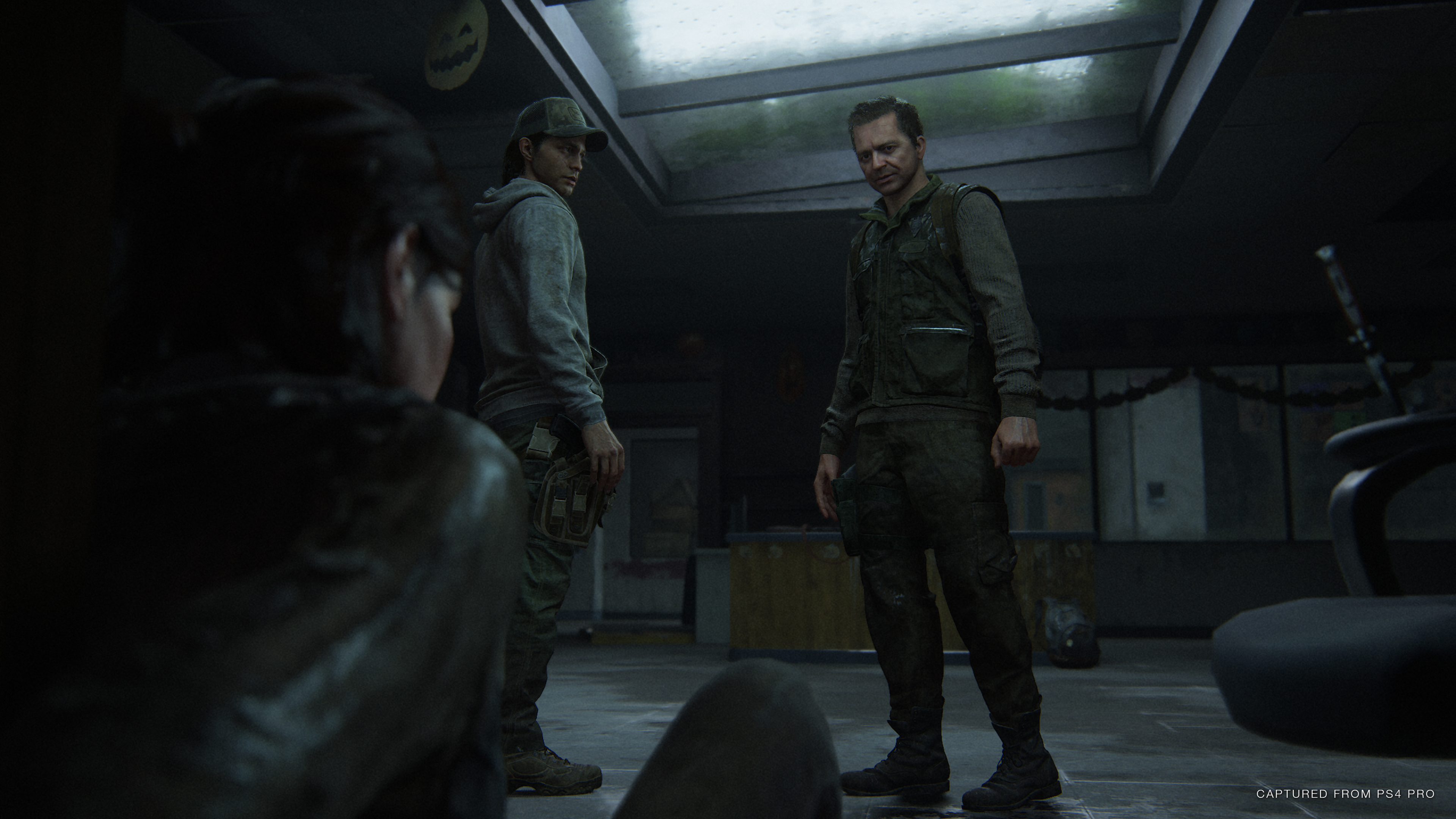