The biggest match on the Spanish football calendar – El Clasico – arrives today. And this Real Madrid vs Barcelona clash is looking as important as ever, with the teams battling things out at the top of La Liga table. Thankfully, watching it is super easy (and affordable), thanks to Sling TV's current offer.

For $10, you can choose between either of Sling TV's World Sport or Best of Spanish packages. Both include subscription sports channel beIN Sport which is hosting this weekend's huge game.

And because with Sling you only have to pay one month at a time, you don't have to feel like you're having to commit to a lengthy contract. Once the dust has settled on El Clasico and you decide that there isn't enough content to warrant any further payments, you can simply cancel at any time.

Your Real Madrid vs Barcelona options in full:

What else does Sling TV have to offer?

If the only lure for you is that Real Madrid vs Barcelona game, then paying your $10 will be all you're interested in. But if you've been considering cutting the cable or changing up your home's TV streaming service, then Sling TV has more comprehensive packages for you to tackle, too.

Sling Blue has the most channels available, with popular stations like AMC, the NFL Network, CNN, Fox, NBC and Comedy Central all included. While Sling Orange has fewer channels but you may prefer its roster – for example, ESPN and Disney are both available. For all the variations, head straight to the Sling TV website or consult our guide to the best Sling TV packages and prices.

Both cost $30 per month (after your first month costing $20), or you can pay $45 a month for both. After that, you can then bolt further channels on like the beIN packages described above.

When is El Clasico on?

If this has piqued your interest and you're now desperate to watch the huge La Liga clash, then 3pm ET / midday PT on Sunday is the time you need to tune in for kick-off (or about 30 minutes beforehand for all the buildup and hype).

As well as Sling TV, beIN can be added to your cable TV package or accessed via a FuboTV subscription. 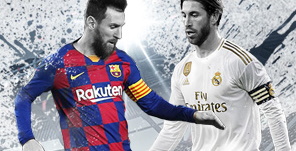