Resident Evil 3 has been remastered by Capcom and is out now, and it sure is a looker. But how does it perform at a monstrous 8K resolution? We fired it up on our 8K test machine to try out.

While we've also done a deep dive into how Resident Evil 3 runs on a variety of different graphics cards, here we look at how well the game runs at the incredibly demanding 8K (7,680 × 4,320) resolution.

To do this, we're running it on an incredibly powerful gaming PC kindly built for us by Chillblast, which includes the most powerful consumer graphics card in the world: the Nvidia RTX Titan, which sells for around $2,499 (around £2,000, AU$3,600).

So, this is a pretty hardcore setup, and not one you'd usually find in many people's homes. But what we want to see is just how realistic 8K gaming is.

So, how does Resident Evil 3 perform at 8K? Well, there's good news and bad. Unsurprisingly for such a graphically-intense game, as it's a particularly VRAM-hungry game.

Because we like to really punish the games (and hardware) we test, we first played Resident Evil 3 at 8K resolution with all the graphical settings set to max.

As you can see in the screenshot below, these settings take up a huge 19.09GB of graphics memory. Considering the most popular GPU for PC gamers at the moment (according to the Steam Hardware survey) is the Nvidia GTX 1060, which comes with either 3GB or 6GB of memory, pretty much every GPU in the world right now is going to be unable to play at this setting. 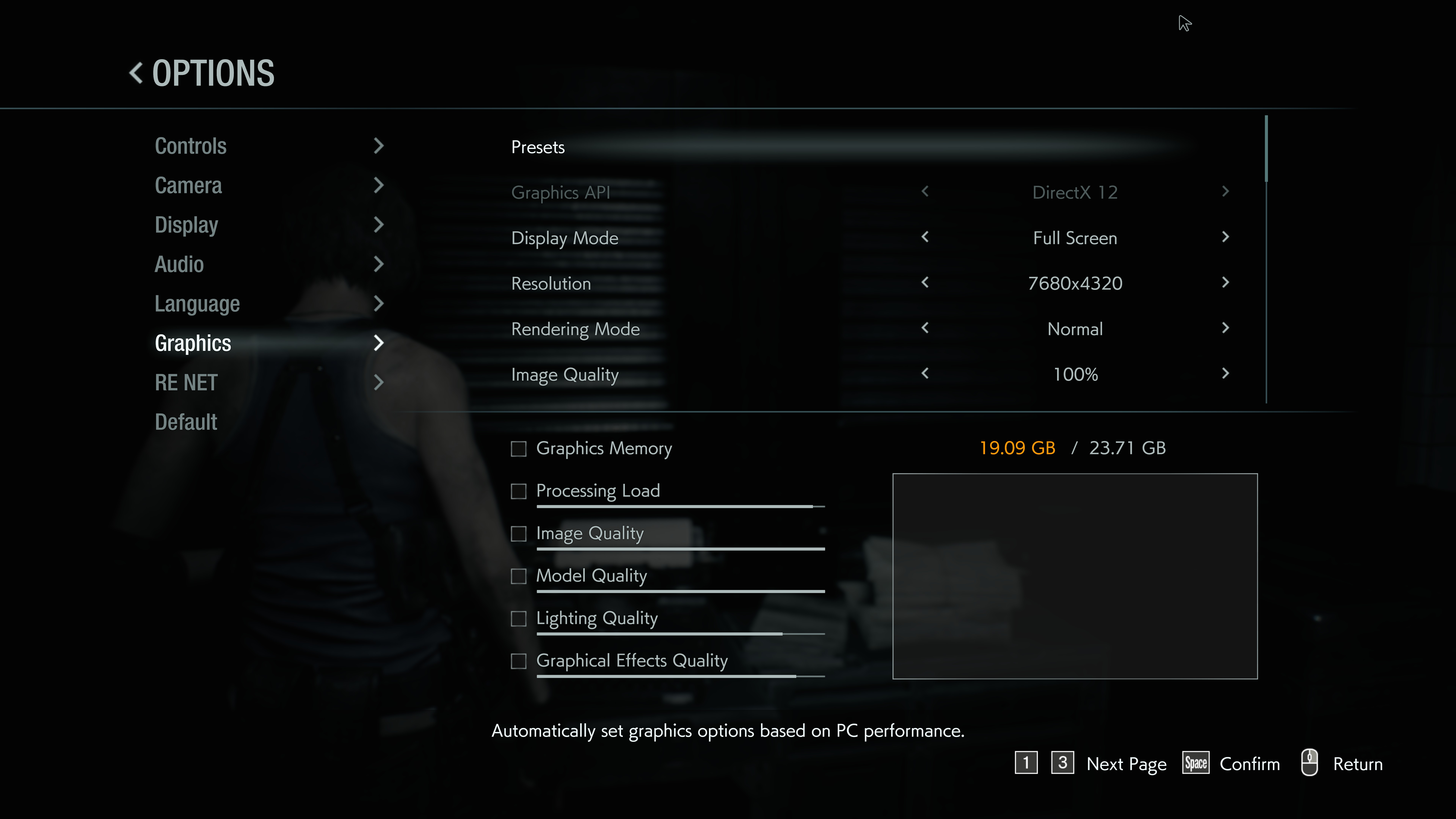 Even the Nvidia RTX 2080 Ti, the flagship GPU from Nvidia, won't be able to manage this, as it features a (still huge) 11GB of GDDR6 memory.

So, only the mighty RTX Titan with its 24GB of GDDR6 memory is going to be able to handle it.

And we use the term 'handle' loosely. As even though our gaming rig could technically play Resident Evil 3 at max settings at 8K, the results were far from playable.

Once we got into the game proper, and started exploring a zombie-infested Racoon City, framerates hung around the 24FPS mark, with the MSI Afterburner software recording an average frame rate of 21.9FPS.

While that's not quite approaching slide-show levels of poor frame rates, it wasn't a terribly fun way to play, with the game stuttering and lagging, especially in sections where there was a lot of action.

However, we have to say, Resident Evil 3 looked absolutely stunning in 8K. That bump in resolution resulted in an incredibly detailed image. Take a look at the screenshot below for an example.

This gave us a thrilling glimpse of what kind of graphical quality we could expect from 8K games in the future – once our hardware catches up with the demands.

So, is Resident Evil 3 completely unplayable at 8K? Not quite. By dropping the preset so that it prioritizes performance over graphics (essentially setting most graphical settings to 'low'), we saw a big uptick in performance.

Playing over the same section again with the lower settings, we managed an average frame rate of 51FPS. and a minimum frame rate of 17.2FPS. In a few quiet spots, we also saw the FPS rise to 61.2FPS.

Of course, the trade-off here is drastically reduced image quality. While there were moments where the game looked very good, it certainly lacked the wow factor that comes with the higher graphical settings.

Crucially, it also fell well short of that magic 60FPS average frame rate. Because of this, and the lowering of graphical settings, we'd recommend going for a lower resolution before dropping the graphical settings.

However, there were still a few tweaks to try. We turned off anti-aliasing completely (one could argue you don't need it when playing at 8K, anyway), and changed the 'Rendering Mode' from 'Normal' to 'Interlaced'.

This appeared to make the biggest impact, with the graphics memory demand dropping to a rather reasonable 2.66GB. Playing through the same section again, we now got average frame rates of an impressive 71FPS, with a minimum of 49.1FPS and a maximum of 162.1 FPS – though that was probably when we stood still in a dark spot for a moment.

Still, that is definitely very playable, and the game instantly felt smoother and more responsive. But looks-wise? Eesh. Not good.

The already ropy visuals looked even worse now, with a weird shimmering effect around fast-moving characters, no doubt caused by the Interlace rendering mode. While we were technically able to play Resident Evil 3 at 8K at these settings, we wouldn't want to. 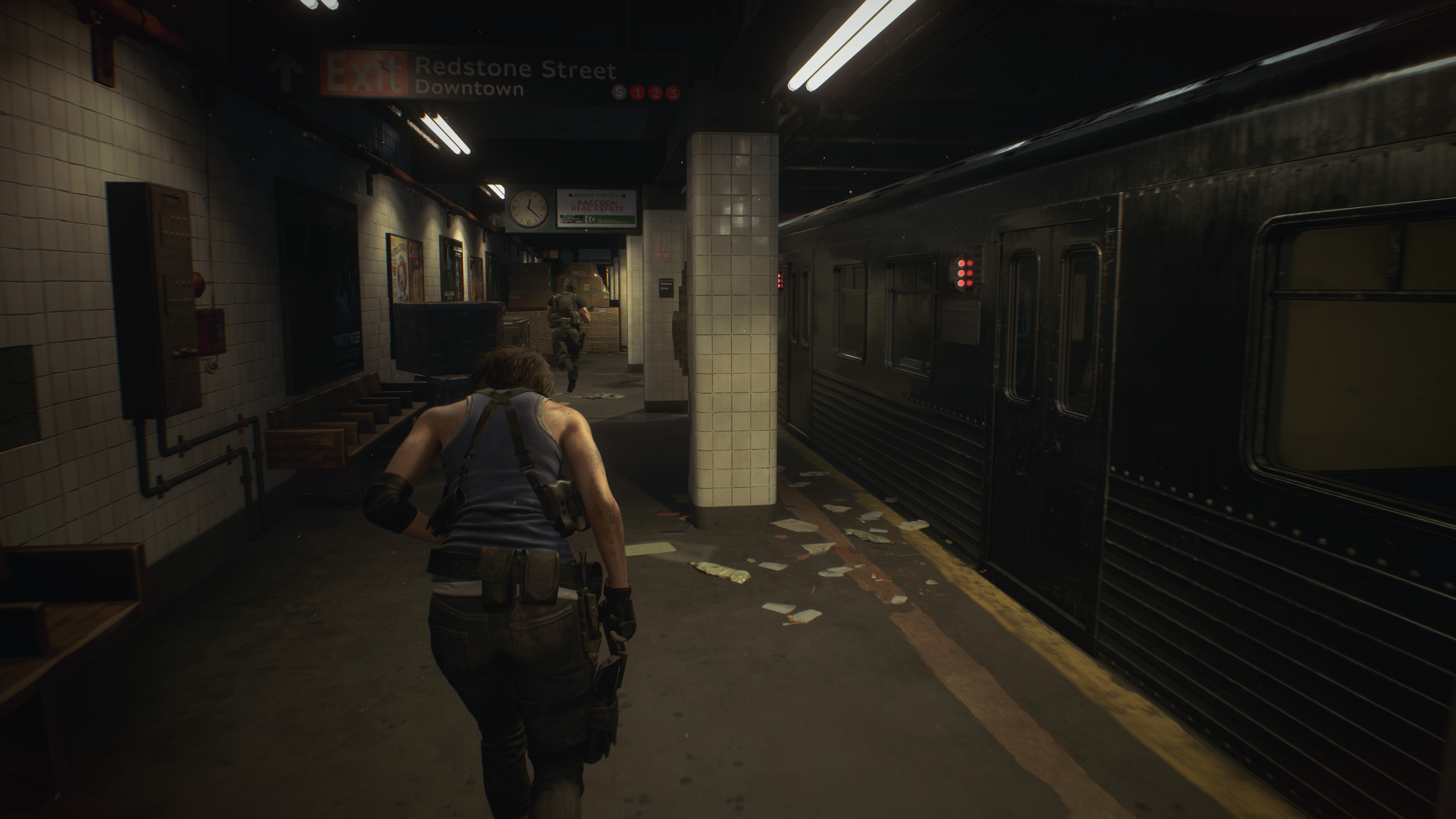 With the Interlaced rendering technique making such a big difference, we looked to see if we could boost the other graphical settings elsewhere in a bid to make the game look good again.

Setting the graphical effects to 'medium' (and in some cases 'high') while keeping the Interlace rendering technique, we saw frame rates averaging 31FPS.

Not bad, but not great either, and the boost in graphical settings didn't make up for the weird graphical artefacts brought in by using the Interlaced rendering.

So, changing the rendering technique isn't a magic bullet for high frame rates at 8K.

In the end, the most reliable way of getting high frame rates while not sacrificing image quality too much is to lower the resolution.

By dropping to 'only' 4K, we were able to get frame rates of 77.2FPS on average, and with all the graphical settings set to max.

4K is still a very high resolution, and the game looked fantastic – and played brilliantly as well.

But do you need an RTX Titan to play it at those resolutions? Certainly not. In our tests we found that the RTX 2080 Ti hit 74FPS on average at the same settings, and this is a GPU that while still very expensive, is almost half the price of the RTX Titan at $1,049 (about £837, AU$1,390).

The Nvidia GeForce RTX 2080 Super is cheaper still, and hits 62FPS on average at 4K and max settings. Perfectly playable and more within reach of PC gamers.

So, while Resident Evil 3 is playable at 8K, and offers a tantalizing glimpse of what our 8K gaming future may hold, the best resolution for most people who want that Holy Grail of high resolutions, stunning image quality and great performance, remains 4K. 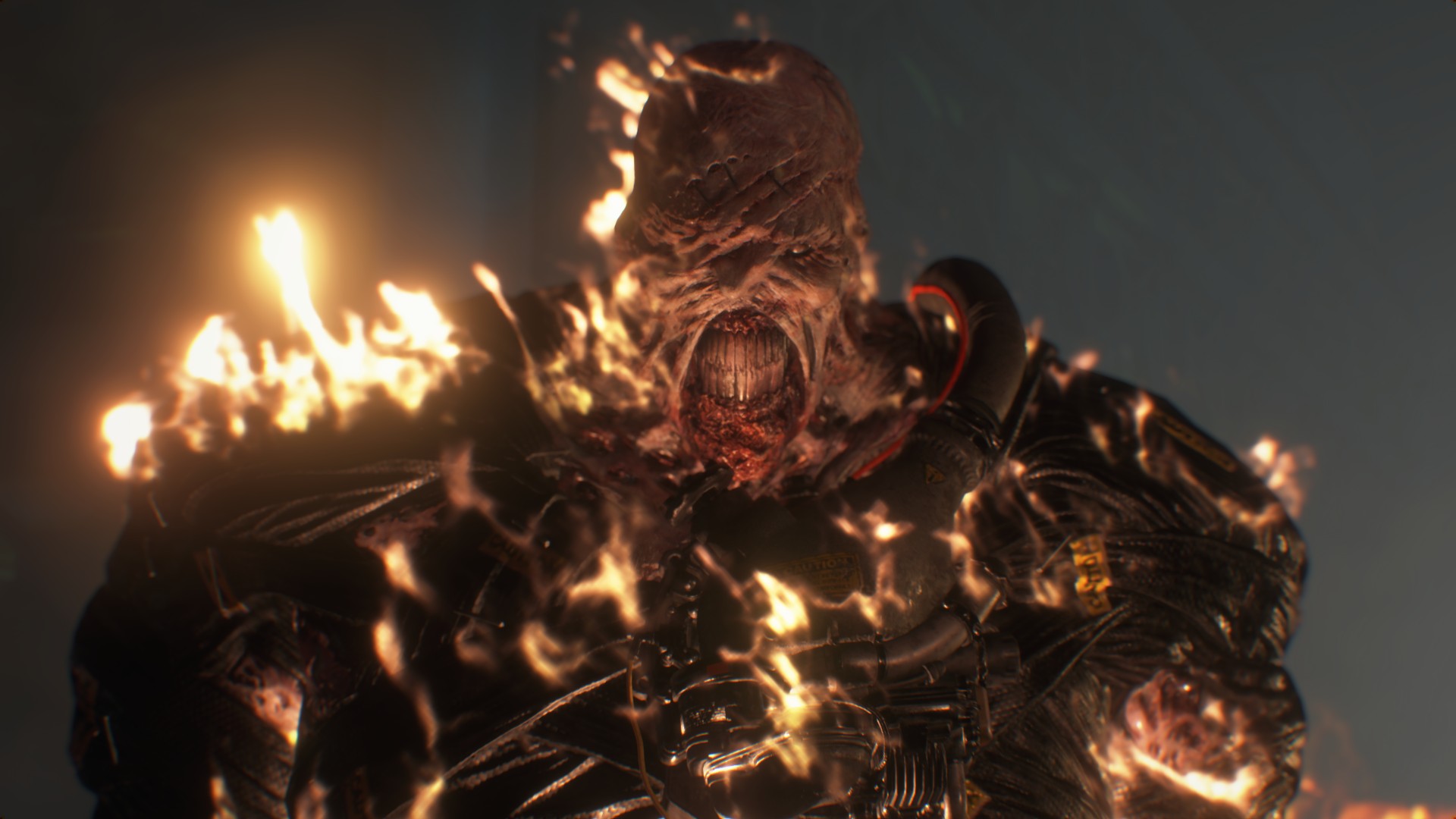