There may be two new PS5 consoles on the way, but you’ve only got one sum of money in your bank account. If you’re looking to make the jump to the next-generation of gaming with Sony, should you opt for the standard PlayStation 5, or save a few notes with the PlayStation 5 Digital Edition?

If you already know which model you want, then PS5 pre-orders have already gone live, and we've got all the best deals listed so you can grab one right now.

Or, you can use our bespoke widget below to see which retailers are currently offering a chance to buy – but be warned, it's going to be flashing in and out of stock for the next 24 hours at least, as we're seeing huge demand:

It’s a tough, almost philosophical choice – one that takes in arguments over ownership of your entertainment media, not to mention what you can realistically afford to spend as we look towards an unprecedented international financial recession.

Fret not! We’ve been keeping our eyes on all the announcements surrounding Sony’s new machines, and we’ve got all the details you need to make the right choice for you – and your wallet. Below, we've compared the PS5 to the PS5 Digital Edition in every single area, from price to specs.

Let’s get the hardcore numbers out of the way first. How much is this going to hurt your wallet?

Both versions of the console will launch on November 12 in the USA, Japan, Canada, Mexico, Australia, New Zealand and South Korea. If you live elsewhere (including the UK and Ireland) you’ve got an extra week to wait, with November 19 being when the rest of the world gets access to the PS5. Select retailers will be accepting pre-orders from September 17.

There’s a significant saving of $100 / £90 to be made if you go for the all-digital route, then. But there are a few things to consider here.

Firstly, you’ll be losing out on the console doubling up as a 4K Blu-ray disc player. Considering standalone 4K Blu-ray players cost several hundred dollars and/or pounds themselves, that’s a considerable chunk of cash saved for the avid high-resolution film fan.

Secondly, those with a disc drive will be able to take advantage of being able to swap, loan, borrow, and trade physical disc-based games with their friends and exchange stores. Over the course of a console’s lifespan, that could add up to considerable second-hand savings. So what you may save now with the digital console may cost you over the course of a few years, since you'll be paying whatever prices Sony and game publishers decide to set. That’s before taking into consideration the actual joy of owning a physical thing.

Here are the full official PS5 specs straight from Sony, including differences for both editions where noted. The two PS5 models will be identical in performance, a big difference compared to the Xbox Series X and Xbox Series S, which are much further apart in price. The only difference is that the more expensive PS5 console will have an Ultra HD Blu-ray disc drive – otherwise they use the same custom processor, and feature the same SSD.

As mentioned, the solid state drive included with both consoles will be the same, offering users 825GB of storage with a raw 5.5GB/s throughput (and up to 9GB/s worth of compressed data). There's a minor difference in weight and dimensions between the PS5 and its Digital Edition, though.

In terms of PlayStation 5 specs minus the disc drive, then, everything is the same in the areas that matter. The PS5 runs off the third-generation AMD Ryzen chipset, with 8 cores and the manufacturer's new Zen 2 architecture and Navi graphics. On the visual side, the GPU features 36 compute units running at 2.23GHz and offering 10.28TFLOPs, while the PS5 packs 16GB of GDDR6 RAM with a bandwidth of 448GB/s. This console can pull off ray tracing – that is, advanced lighting that used to be the sole domain of pricey PC graphics cards. Expect fancy reflections in the games you love as a result of this addition.

3D audio is a big part of the PS5 offering, no matter which edition of the console you own –  immersive 3D audio will be powered by the Tempest Engine, which can translate sound sources in the hundreds to create realistic audio.

The PS5 can support up to 8K resolution, which many players won't need on their 1080p TVs. Whether games will run natively in 8K is more of a question mark, but it means the console is future-proofed if you decide to buy a nicer TV down the line. In addition, the PS5 will support 120Hz refresh rates, allowing you to enjoy smoother games if they offer a higher framerate.

It's unlikely that most games will max out these possibilities in the short term – indeed, Spider-Man: Miles Morales will offer a 4K 60fps performance mode, which will likely dial back visual effects to hit a higher framerate than the PS4's usual 30fps.

Both consoles will include a single wireless PS5 DualSense controller, which features adaptive triggers and haptic feedback, supposedly to elevate the feeling of realism in your games.

Both consoles can play PS4 games, and you'll be able to buy an external HDD for additional storage to play these older titles so you conserve the SSD space for PS5 software.

PS5 vs PS5 Digital Edition games: they'll be the same

With identical internal specs, you’ll be able to enjoy 4K gaming at fast refresh rates on both the PS5 and its digital-only counterpart, and expect to see no difference in gameplay between the two.

Where things get a little murkier is in the backwards compatibility front. Yes, the digital edition of the console will play PS4 titles – but it obviously won’t be able to play your existing, disc-based collection.

Instead, you’ll likely have to purchase them again, digitally. Sony is taking the sting out of that fact slightly with the introduction of its PlayStation Plus Collection perk for PS Plus subscribers, though. Going forward, the cost of the subscription of PS5 owners will also include access to free downloads of 18 top PS4 games, including God of War, Uncharted 4, and Bloodborne, among others. It’s a nice perk, and an instant PS5 library of games for newcomers to the console family. But it doesn’t do much to cover the hundreds of PS4 titles out there on discs for PS5 Digital Edition owners.

It’s hard to make a call on financial matters – if you’re an avid gamer without the cash to make the big jump to the top-tier PS5, by all means go for that digital console. Next-gen gaming is sure to be a delight on that entry level model, too, and it's great that performance will be consistent across both.

But our gut feeling remains that, should you be able to afford it, go for the standard, disc-based PS5 console. It’ll open you up to access the joys of 4K Blu-ray viewing (they look better than 4K Netflix streams, honest!), not to mention the potential money you’ll save over the years in trading disc-based games with your friends and at exchange shops.

One last thing to consider, too, is the grey area that is digital ownership – be that of music, films, or indeed games. While we’ve yet to see the small print on the PS5 in this regard, it’s commonplace that, when it comes to digital media, you don’t actually own a title in perpetuity. Should, in the year 2035 or some other distant date, Sony decide to switch off the PS5’s digital storefront distribution… where then will you re-download your games from?

Yes, the online elements of modern games means that patches come frequently, and can sometimes be required before a game will even work. But if Sony’s servers ever get taken out due to unpredictable circumstances, it's not quite as reassuring to have a solely digital games collection compared to a physical one.

And in the rare event that your discs ever stop working: at least you’ve got a nice case with box art to reminisce with… 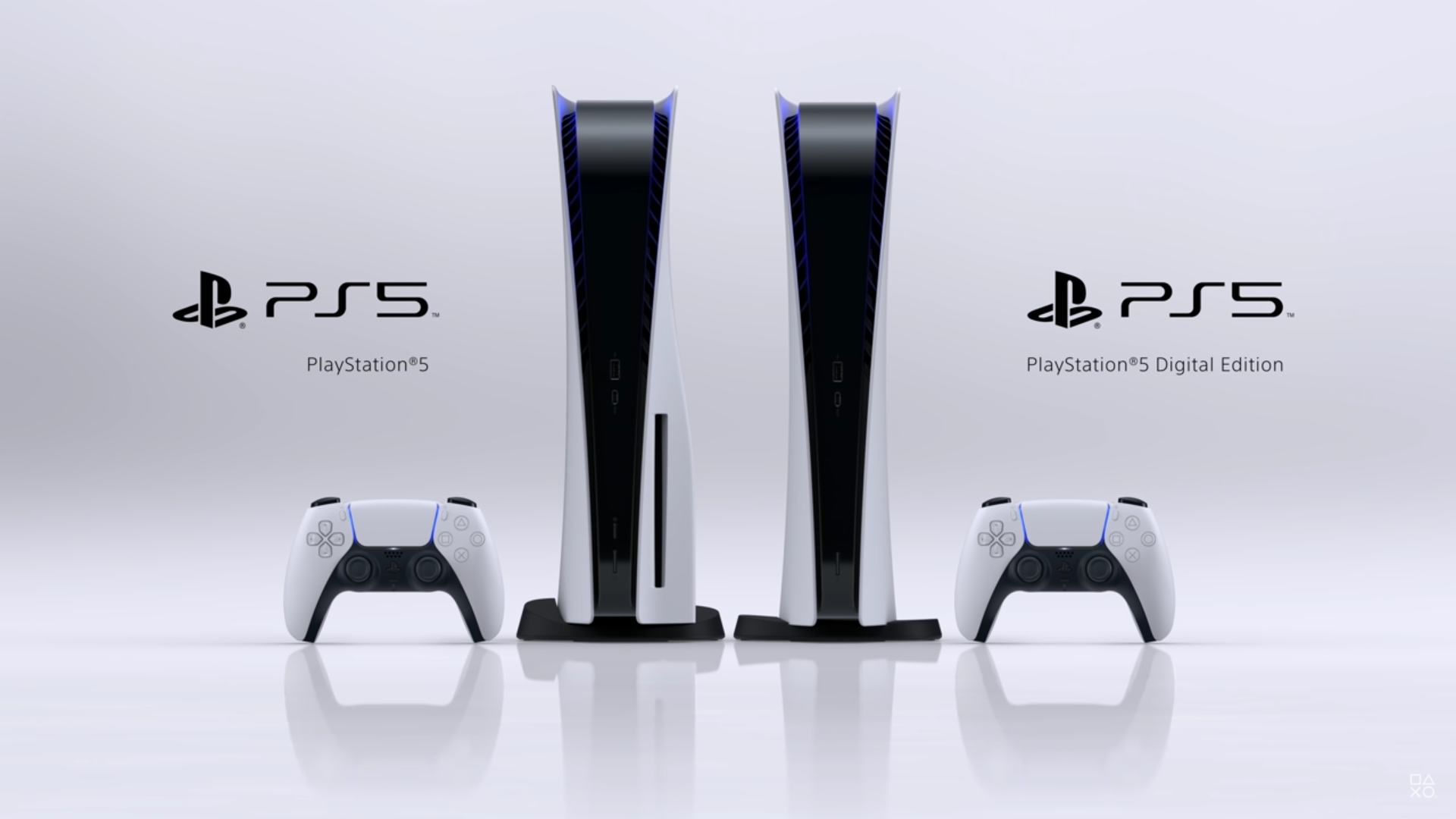