Foldable phones are some of the most innovative devices we've seen in recent years, and creating a bending handset poses quite a few design questions that aren't asked when you make a traditional smartphone.

That is especially true of the Motorola Razr, the second widely available foldable phone and the first in a ‘clamshell’ design that is reminiscent of older flip-phones. It's designed as a sequel to the iconic Motorola Razr V3, and the two iterations that went before it.

Originally, Motorola didn’t set out to build a modern-day flip phone though. In fact, the company originally considered creating a wearable with a flexible display before it settled on a spiritual ‘Razr V4’.

We spoke to Motorola's Ruben Castano, Vice President of Consumer Experience Design, and Carl Steen, Director of Product Management, who worked on the Razr's 2019 reboot. The two worked on the phone from its inception, and offered us a glimpse at the process of creating a clamshell folding phone.

The ball gets rolling on the foldable phone

While foldable phones are only just hitting shop shelves, the first seeds of what turned into the Motorola Razr were sown over six years ago.

“Right around 2014 is when we started to see the technology progress to a point where it started to make sense to look at implementations for consumer products”, Castano told us.

For context, that’s the year the second-gen Moto G smartphone hit shop shelves, and it was a couple of years before the company introduced its innovative Moto Mods.

The team began experimenting with ideas, but it didn’t go straight to the clamshell design we know today. "There was a lot of debate internally in terms of what really was the right form factor,” Steen told us.

“We showcased a couple of possible applications, one of them being a foldable type device that went from a traditional smartphone to more of a tablet and then to a larger device."

That design sounds similar to the Samsung Galaxy Fold, while another design concept sounds remarkably similar to a wearable device called the Nubia Alpha.

Steen told us the concept "was flexible enough to actually fit around your wrist […] using the technology to conform to your body."

It sounds similar to a smartwatch or fitness tracker that wraps around your wrist, and that would have been a very different device to the Motorola Razr we eventually saw.

“It was probably two and a half years ago when we really narrowed down on the right form factor”, Castano told us. That would have been late 2017 or early 2018, meaning it took three or four years for the team to decide that they wanted to make a clamshell device.

Steen said, “the consumer told us what was the right form factor. That was small, portable and pocketable”.

It all hinges on the design

When the design type was decided, that was when the real work began. Castano explained, “we then had to really double down on solving the very difficult intricacies of creating a foldable device, which are really around the architecture, the hinge and the durability of the display.”

When Castano says architecture, he means the overall look and components of the phone. "We didn’t really set out to design a Razr replacement", said Steen.

“For all the same reasons that the original Razr ended up with a chin, we quickly came to the realization that to achieve the type of finesse that we really wanted, this chin architecture provided the perfect form for the antennas and other important components of the device”.

That means some of the same design innovations that went into making the original flip phones of the early 2000s were used by Motorola again here to create the foldable Razr.

Some have criticized 2019's Motorola Razr for its lower than flagship specs, but Motorola doesn't see this as an issue. "We weren’t designing a flagship phone per se – we were designing the world’s smallest foldable phone", said Steen.

Top-end specs weren’t exactly the number one priority, and could have actually got in the way of Motorola's intent to make an ultra-thin device.

As an example, Steen explained why there wasn’t a Qualcomm Snapdragon 855 Plus chipset – the top-end processor when the Motorola Razr launched – inside the phone. “The Snapdragon [855 Plus] only brought to the table things like Quad HD performance. We don't have a Quad HD display, so that would have been overkill.”

The hinge was another obstacle that the Razr team had to overcome, but they had an ace up their sleeve.

“We actually partnered with our Lenovo R&D team”, Steen explained, "that has created products like the Yoga range of laptops. They had some hinge expertise, and between their developers and our developers we narrowed it down to about three different hinge concepts."

Choosing which of those concepts was best for the device was simply about picking the one that followed the design intent best. The company opted for the design that had the smallest gap when the phone was folded together but could also be opened by flipping it.

Finally, there was the display to reckon with, as the team needed a foldable screen that, well… folded.

Steen explains, “we relied on a lot of the expertise we had on previous P-OLED designs [plastic OLED] and then shattershield [Motorola’s shatterproofing phone screen tech] and understanding the different polymers, as well as what was needed to create a very robust display."

Getting the individual aspects of the Motorola Razr to work wasn’t the hard part; it was when they came together for the full package.

Steen explained, "it was once you brought them together as a system that the challenge became significant, and required a lot of expertise and engineering innovation."

Every aspect of the phone went through “component level testing, making sure it was durable,” Steen explained, “then we married [the different parts of the phone] together to do the same thing.”

“There’s a set of tests that we do run on all our smartphones that’s included in what’s called the accelerated life testing." These tests involve humidity performance, durability through everyday scenarios and much more.

“It exposes the weaknesses of the system and allows us to go focus on those weaknesses, fix them, and then take them back to the accelerated life testing again. There were multiple cycles of that throughout the development process.”

Motorola shared the below video on its YouTube channel, which gives some glimpses into the testing process of the Motorola Razr

We asked Steen if there were any dramatic failures in any of the tested phones, and he said “there was nothing that changed dramatically from an architecture perspective.

"It was really about tuning it and optimizing it to develop it into the product that we ended up with.”

The 21:9 aspect ratio of the Motorola Razr is something we’ve seen the company do before in phones like the Motorola One Action that was also unveiled in 2019.

Castano described the aspect ratio as, “a sweet spot for a handheld device, which when folded in half becomes very pocketable”.

The final stage in Motorola’s quest to create the Razr foldable was testing the device as a phone, and Steen explained that he had been using the phone for around a year prior to release.

Steen found that the QuickView display changed the way he used his phone.

"I didn’t really realize until it was happening over a period of months. I wasn’t constantly looking at Facebook or constantly being pulled into the vastness of the typical smartphone experience.

“Having that display on the front of the device was not only useful in giving me the right information I needed, but it also changed my behavior on my smartphone in a good way.”

It remains to be seen if the Motorola Razr, and foldable phones in general, change the way we interact with our portable pocketable devices for good.

If there’s one thing we can say for certain, it's that we're excited to see where manufacturers take foldable designs next. 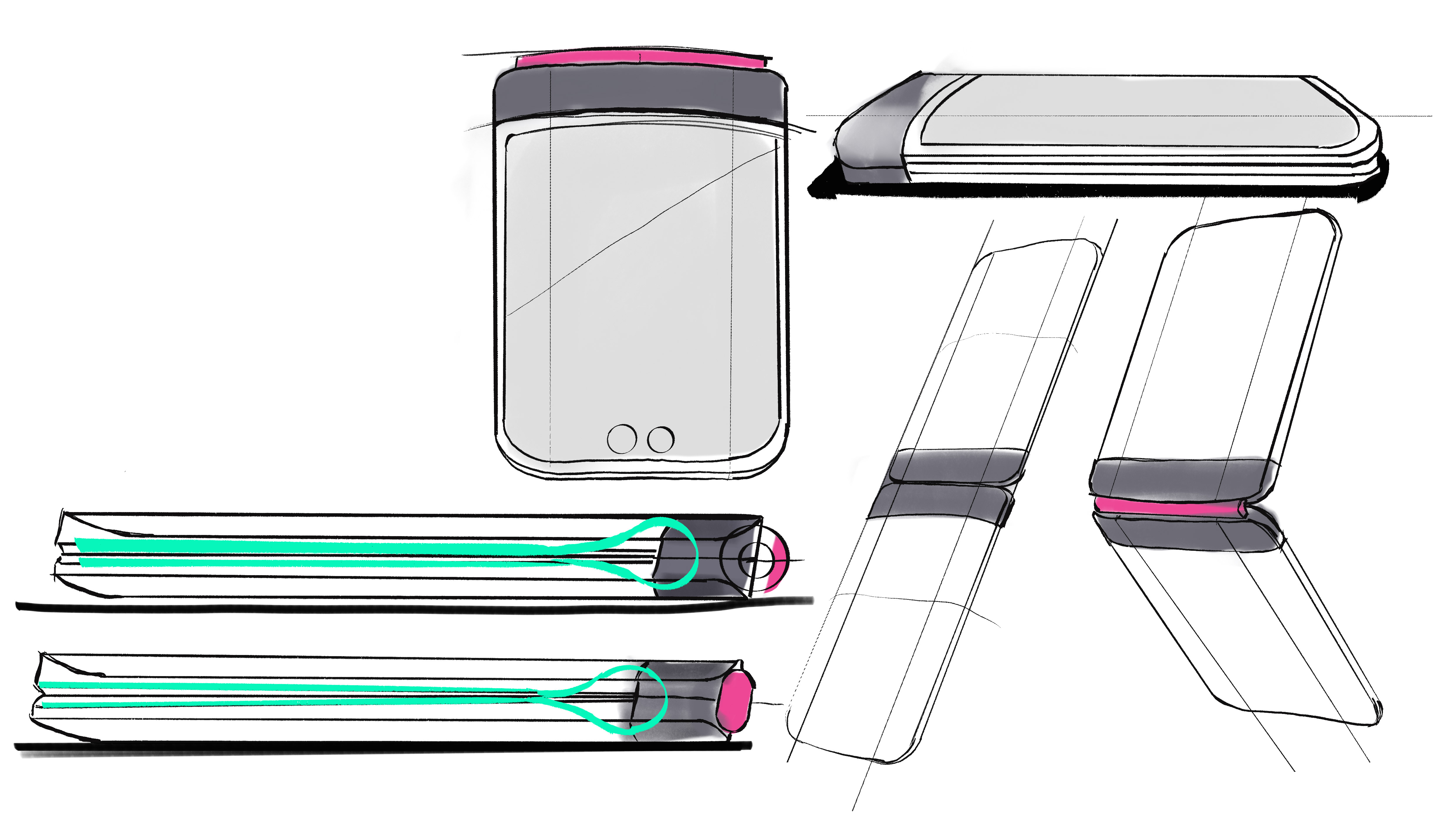