Black Girl Gamers is a multi-platform age, and LGBTQIA+, inclusive online gaming community on Facebook of over 6,000 black women united in their love of gaming.

It runs a Discord group with channels that cater to sub groups within its community, and guest-hosts black female streamers on its Twitch channel. In its five-year life it has put on a number of important events, like its Gamer Girls Night In and its recent online gaming summit sponsored by Twitch.

Black Girl Gamers (BGG) was created in 2015 by author and UK influencer Jay-Ann Lopez. Frustrated with the racism and misogyny she, as a black woman, experienced in gaming, she wanted to increase visibility and inclusion for women within the industry.

By the time Jay-Ann created BGG she was no stranger to creating a community for minority voices. She had already created, along with best friend Trina Charles, an “online empowerment platform” called Curlture.

A year later, Jay-Ann decided to do something similar, but in gaming.

“I wanted the kind of same representation and comradery in gaming that was in beauty," Jay-Ann told us. "Because in gaming you would see a lot more vitriol — be it sexism, racism — than you do in beauty. I was like, well this space needs to have been made five years ago! There were smaller spaces made, but … Like when I do things it's either go hard or go home, and they didn't — by my definition — go hard. They were quite small and understated and — not to disrespect anyone, because everyone has different circumstances in their life — I definitely feel like we should have had more of a splash in the scene.”

Jay-Ann had created her own gaming channel around this time, which she later abandoned to properly concentrate on BGG. Some of the people she met during this time helped her to build the community.

“So, it was myself and three other women who were looking after the community at the time and it just grew and grew.”

At the time Jay-Ann was running BGG, she was running Curlture and also balancing a full time job. To top it all off, she was experiencing personal struggles which caused her mental health to take a hit.

“It was such a traumatic time for me because I broke up with my boyfriend of six years. It was hard. I lost hair on my scalp due to stress and then I was paying for everything myself for a period of time.”

Due to the breakup, Jay-Ann was left with the full responsibility of a mortgage, had no family that lived close enough to support her and she was essentially alone with little support from her employer at the time, and ended up losing her job as a result.

“So during this time I'm still doing stuff with BGG. BGG and Curlture become my outlet. I won an award sponsored by Facebook and I pitched Girl Gamers’ Night In to them. So there has been a lot. A break up, loss of a job, change of a job, being in debt, getting out of debt. And balancing the two platforms.”

Despite all of this, BGG was still making major strides in the community and achieving its goal of increasing visibility for black women gamers.

“We did our first panel — that was Pax East in 2017 in Boston — and then our first panel in the UK in 2019 at the V&A Museum. So we just started building up more and more on our events,” Jay-Ann explains.

After the V&A panel, which was on the future of gaming and gaming culture, BGG hosted its first ever UK event, Pass The Pad.  Partnered with Belong Gaming Arenas, its aim was to deliver a night of gaming, panels, tournaments and Super Smash Bros, Overwatch and Anthem gaming areas.

BGG was then featured on a number of mainstream news outlets including, Sky News, BBC New, ITV News and i-D Magazine, and appeared at various tech and gaming conferences and panels in the UK and US.

Jay-Ann was UK video games brand MCV’s Women in Games award recipient for Campaigner of the Year in 2019. The award was sponsored by Facebook, and it led to her pitching Gamer Girls Night In (GGNI) to the company.

GGNI would end up being the first gaming event of its kind in the UK. It was free, and was co-produced by Jay-Ann and Stephanie Ijoma, known as Nnesaga, an anime, comics and gaming content creator in the UK.

It comprised of a panel of talks made up of diverse women from all areas of the industry, as well as cosplayers. There were nail technicians, tournaments, PlayStation arcade booths, food, a cocktail bar and much more.

“There are women — not all women — but there are women who like to get their nails done, and have a little drink and a little turn-up. Why can't we merge those things? All the gaming events are made from this stupid template that was made from a male perspective. I can't wait to bring Gamer Girls Night In back to life, because it just needs to happen. I'm tired of the same — the blues and neon greens, and EDM.”

Why Black Gamer Girls is necessary

While the announcement was generally met with praise and excitement, there was some push back from men who felt it was unnecessary to have a group that specifically targeted black women, as they believed it to be exclusionary. Some considered it “racist” or asking for “special treatment”.

… seriously? Why does this organization have to be black focused? Do we really have to make a organization for every race and sex now? Why not just… and I know this is crazy, support everyone equally? GASP pic.twitter.com/vQARkbYyP2June 12, 2020

It’s hard to understand why someone who thinks something doesn’t matter takes the time to complain about it.

Thankfully, there were male gamers who were able understand the need for such a space and took no offense whatsoever:

This is supporting everyone equally, there wouldn’t be a need to make sex/race focused organisation if everyone were equally, just because people like you and me are excluded, doesn’t mean this isn’t necessary, this doesn’t hurt anyone, don’t complain.June 12, 2020

In a 2018 article on Engadget, journalist Jessica Conditt wrote about Black Girl Gamers and some of the reasons why the community was necessary.

The comments alone were testament to the type of ignorance black female gamers are expected to combat and endure in order to just game in peace.

Offensive language aside, the overarching criticism from Black Girl Gamers naysayers is why it is necessary and why get special treatment?

Special treatment is not what is being asked. BGG simply asks for acknowledgement of its existence and that of the women that form its community.

Now, the next question that probably comes to mind for some is, “all women experience toxicity within the community. What makes black women so special?”

'Misogynoir' is a term coined by queer black feminist Moya Bailey to describe prejudice and hatred targeted at black women. This is the daily experience of many black female gamers, leading some to abandon games they love and disguise their gender and avoid discussions of race to avoid targeted abuse.

In an interview with BBC London South East, Jay-Ann shared some of the abuse she received while playing games as a black woman. Depressingly, it's quite easy to guess the sort of disgusting abuse she's had to face.

BGG has a Twitch Stream Team which was created to give a bigger platform to black female streamers that are often overlooked by Twitch and other organizations. It also provides a little more security for streamers, but even then they are subject to racist Twitch trolls.

It was recently discovered that a Steam group posing as BGG was set up with the tagline BGGWPG, with the WPG standing for “White Power Group”. It was filled with racist and misogynistic comments.

The gaming industry has been, to put it bluntly, white-male-dominated for quite some time, and, while there’s nothing wrong with that, it does mean that the industry can all-to-often neglect minorities.

If there wasn’t so much casual homophobia in gaming, individuals such as Matt Hardwick would have never needed to create London Gaymers, a community for LGBTQ+ people.

Streaming is difficult for women, never mind black women. Female streamers are held to different standards than their male counterparts. They are criticized for the clothes they wear on stream, and often accused of using their “assets” as a means to garner more followers.

People say they can’t play certain games, and if they can, they’re told they can't play them well. They have to endure common insults like “get back to the kitchen” and “make me a sandwich”.

In 2019 Statista, a leading provider of consumer and market data, ran a survey on gaming stats based on gender in the U.S. from 2006 through 2019.

The data collected found that in 2019, women made up over 48% of all gamers in the US; a gradual rise of almost 10% over the past thirteen years.

However, some felt those figures meant very little as it didn’t account for what types of games and which platforms women were playing on.

While looking through data companies’ reports on gaming stats, we were surprised to find no stats on gamers and race, which, to some, may not be necessary. But how could it not, seeing as these things are important enough to garner such a toxic culture of racism?

“A lot of companies have ignored BGG for a while up until recently,” reveals Jay-Ann. “Twitch hasn't 100% but they haven't been the best either, and I've told them this.”

BGG has always been open to collaboration with sponsors and companies. After all, its biggest goal is to push for more inclusivity. Shola Kasali, Arcoms Activation Manager for EA, and Twitch’s Community and Creator Marketing lead Eren Aureylian — who Jay describes as a “super advocate” – and a couple others have helped to push this aim forward, through its support of BGG.

“A couple other companies have reached out, so we're gonna see what we're gonna do with like Naughty Dog and stuff like that. But at the end of the day they haven't sent no copies of Last of Us 2, so I'm watching them.” She laughs. “I'm definitely watching people. It's been interesting. I won't say it's been smooth sailing 'cause it hasn't.”

“The thing that they can do is have mentorship," suggests Jay-Ann. "Have fast tracks for black women into their company. Show them how to nurture creatives, how to help them get sponsorship and put them in contact with brands. They have ideas but it's never on that kind of level as far as I'm aware – they kind of look for us to consult them which I'm happy to do.”

In the end, gamers are extremely diverse, and that’s one of the many strengths of our rich community, so asking to see some of that diversity reflected in the industry is surely not asking for too much, and would serve to enrich the community we know and love so dearly. 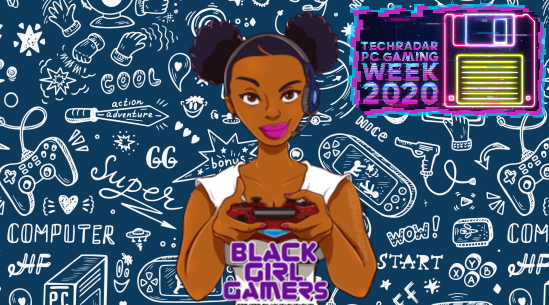