Size versus precision. Cinematic scale or nitty-gritty features. Console versus PC. Such are the traditional dividing lines between a gaming TV and gaming monitor – or, how they used to be.

More recently, gaming TVs have acquired capabilities and features making them better suited than ever for not just console gaming, but big-screen PC fun, too. The upcoming PS5 and Xbox Series X consoles from both Sony and Microsoft will support features that make them a much better match for PC monitors as well.

Of course, that isn’t the whole story. Monitors retain several gaming-centric features that can’t be had on TVs. Likewise, TVs retain certain advantages that may sway you over their monitor cousins.

To help you figure out which is the best screen solution for you, here’s our guide to the key differentiators, the features you need to look out for, and how to choose the right screen for your gaming platform of choice.

You almost certainly won’t get true HDR support, high refresh rates, adaptive sync, low latency modes and other gaming-centric features in a budget 4K TV, which is worth keeping in mind – but models like the 43-inch TCL 43DP628 are surprisingly effective given pricing of just $250 (around £200 / AU$400).

For PC gaming it’s worth remembering that driving the eight million pixels to a 4K TV puts a huge load on your PC’s graphics card. For many PC gamers, therefore, a lower-res 1440p (2560 x 1440 pixel) monitor might be a better compromise between detail and performance.

A smaller 4K monitor, such as a 27-inch or 32-inch model, such as the AOC U2790PQU ($350 / £299 / around AU$480) will also generally look sharper and more detailed than a huge 4K TV, though that does obviously depend on how far you sit from a given screen. It’s worth remembering, too, that you’ll need to spend way more to get a 4K monitor with lots of gamer-centric features.

For consoles, the PS5 and Xbox Series X are both being pitched as true 4K machines. Previous consoles have some support for 4K, but for the most part aren’t powerful enough to drive a 4K screen at native resolution. Likewise, remember that existing and even future consoles aren’t a good fit with ultrawide aspect ratios. For console gaming, you want a conventional 16:9 aspect screen.

If you’re an esports aficionado who can really feel the difference in response and speed of a 240Hz-plus monitor, fair enough. For everyone else, we’d reckon screens around the 144Hz to 160Hz mark, such as the Gigabyte Aorus CV27Q ($389 / £450 / around AU$540) currently offer the best value.

Until recently, TVs simply couldn’t compete for refresh rate – and they still can’t match the fastest monitors. But 120Hz sets are now widely available and enable a surprisingly cost-effective way to combine big screen gaming with high-refresh performance. You can even get 120Hz OLED TVs for a (relatively) reasonable price.

Of course, current consoles don’t support high refresh. But both the PS5 and Xbox Series X will support 120Hz. That not only means you can consider a 120Hz TV; but also makes high refresh monitors a more practical option for console gaming.

The subjective speed of a screen is a function of several factors, including refresh rate, pixel response, input lag and the way it syncs with your gaming device.

Like so many aspects of screen technology, TVs have closed the gap to monitors when it comes to response. Just five years ago it was hard or impossible to find a TV with high refresh, low input lag and support for adaptive refresh. Now all those features are becoming much more widespread.

With a little due diligence, for instance, TVs with truly low latency can be found. The Samsung Q70R QLED, for instance, has input lag of below 15ms. That’s fine for all but the most demanding esports gaming.

Pixel response, or the time it takes the pixels that make up the image on a display to change colour, is if anything even trickier. There’s no industry standard to measure pixel response and many TV manufacturers don’t quote a number in any case. But if you want the best in response and image quality, something like the LG UltraGear 27GN850-B ($499 / £384 / around AU$700) with its 1ms IPS panel is as good as it currently gets.

Then there’s adaptive sync or refresh (also known as variable refresh rate or VRR). The idea is to synchronise the output of your gaming device with the display for a smoother experience with fewer stalls and stutters. Once the preserve of monitors, many TVs, such as the 48-inch LG CX OLED, now support adaptive refresh in both AMD FreeSync and Nvidia G-Sync formats, making them fully compatible with PC adaptive sync.

Again, existing consoles don’t offer adaptive refresh, but it’s part of the feature set for both the PS5 and Xbox Series X.

HDR (high dynamic range) is one of if not the biggest change in display tech in the last five years. HDR screens give you more of nearly everything – brightness, contrast, colours, the works. Unfortunately, HDR screens don’t always do quite what they say on the tin. There are multiple standards and many screen makers commit the cardinal sin of conflating support for HDR signals with the ability to actually render an HDR image.

Meanwhile, most so-called HDR monitors don’t support local dimming and really only have the ability to process an HDR signal and render colours correctly. Any PC monitor not capable of at least 600 nits brightness won’t be capable of true HDR rendering.

Display interfaces – the ports and cables used to connect your gaming machine and your monitor – are the final piece of the puzzle and, indeed, the enabler of many of the features and technologies we’ve covered.

A key factor is bandwidth: you need more of it as resolutions and refresh rates increase. HDR colour spaces also up the need for bandwidth between the gaming device and display.

Some features, such as adaptive refresh, were originally reserved for DisplayPort but are now supported by HDMI. If you want to be sure of adaptive refresh support – and also have plenty of headroom for both high resolutions and high refresh – look for TVs and monitors with either HDMI 2.1 or DisplayPort 1.2 and above. 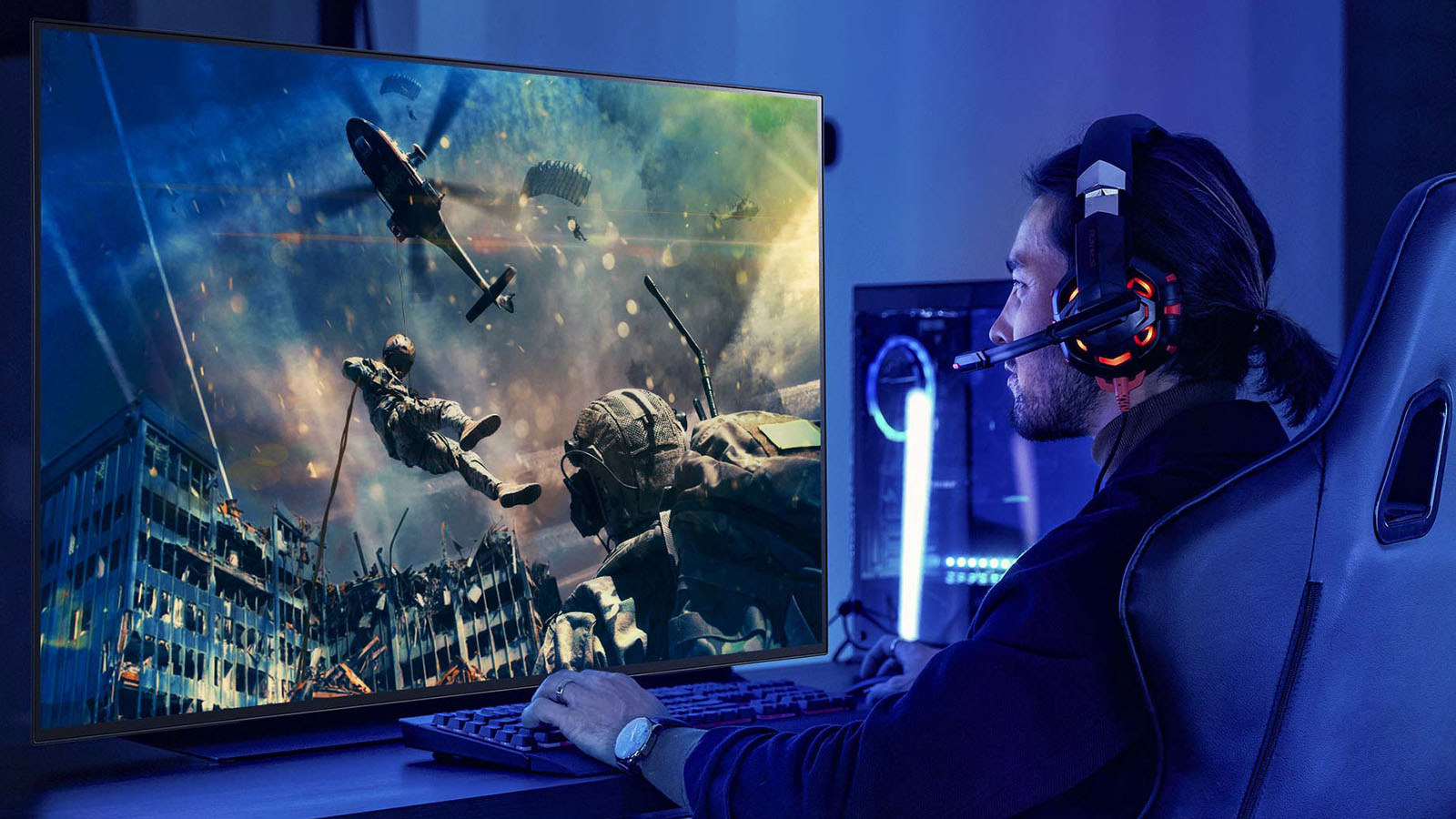