The BMW 1 Series is the German firm’s entry-level vehicle, but just because it’s the baby of the range doesn’t mean it rolls up under-equipped.

In fact, if you’re willing to open your wallet, you can stuff the BMW 1 Series full of flagship car tech, but even if you don’t go option crazy there is a solid grounding of features for you to enjoy.

While the 1 Series starts at £24,430, we got behind the wheel of the M Sport, which starts at £27,230. However, once the various packages are added – including two technology packs – the asking price of our particular model reached £35,185.

It’s not exactly cheap then, but the BMW 1 Series isn’t a budget car, it’s a compact premium vehicle with an awful lot to offer.

BMW has improved the design of the 1 Series, with the car now boasting a sportier, sleeker aesthetic. As we had the M Sport model, ours came with a rear spoiler to add to the sporty look.

The front is dominated by the large BMW grille, which glints in the sun and adds to the car’s macho stance. It’s a look we liked, but it’s not for everyone and for those who prefer softer, more rounded styling the 1 Series may be a little much.

Inside, and the premium feel continues, with soft touch plastic and leather comprising most of the dash and surrounding areas. It’s a smart look, and doesn’t look too cluttered thanks to a lot of controls being available on the large touch screen display – reducing the number of physical buttons required.

It’s a comfortable place to sit too, with the front sport seats nicely cradling you without squeezing you too tight. They’re heated as well (front seats only), along with the heated steering wheel.

Another nice touch are the cabin’s ambient lights. They were set to blue as default in our 1 Series, but you have the option to change to a number of other hues including white, red and green. 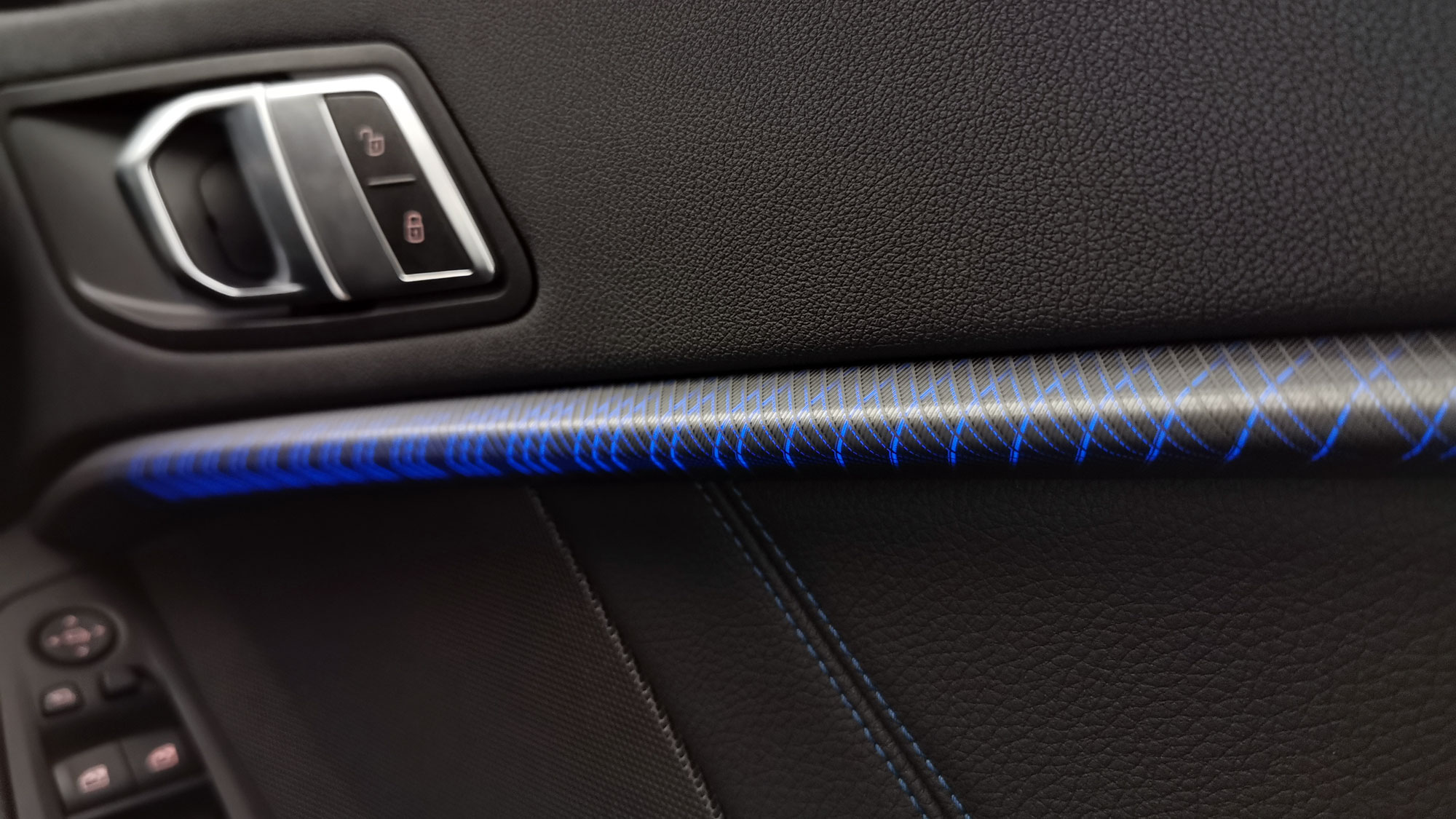 The light bars on the inside of the doors (above) are particularly eye-catching and provide a calming ambiance at night.

The three seats in the back provide enough room for kids or a couple of adults, while the boot provides a suitable storage area for a couple of large suitcases, the weekly shop or a pram.

In terms of drive, we had the 6 speed manual at our disposal, and along with the 1.5l engine the 1 Series delivered effective speed off the line and its light, nimble steering made it easy to flick through corners.

You can comfortably cruise at high speed too, and the insulated cabin ensures road noise is kept to a minimum for a relaxing experience. Press the Sport button, and the suspension stiffens and there’s a little more juice in the accelerator pedal if you’re feeling racier.

One slight niggle we had was putting the car into reserve. You’ve got to push the gear stick all the way to the left, but then slightly down, before going up. Sounds relatively easy, but in practice it’s far from a fluid experience. It will take a while to master.

The BMW 1 Series is one of the cars moving in-car tech forward, and that can be seen from something as simple as its USB ports. There are four in total, but only one – the port between the cup holders and wireless phone charging pad – is the traditional size.

The other three (one under the central armrest, the other two accessible to the rear seat passengers) are all USB-C ports. This newer port provides faster charging, and is slowly being embraced by phone manufacturers.

What it means, however, is you’ll likely need to buy yourself a new charging cable for your phone if you want to use these USB-C ports – very few smartphones are bundled with a suitable cable, although it’s likely to improve in the coming years. Still, the cables aren’t expensive and once you’ve got them you can enjoy faster charging in your car.

The wireless charging pad – compatible with most wireless charging phones including the more recent iPhones – is on an angle and needs you to slide your phone down, into it where it will hold it in place. This stops the phone sliding about while you’re on the move, ensuring constant charging. 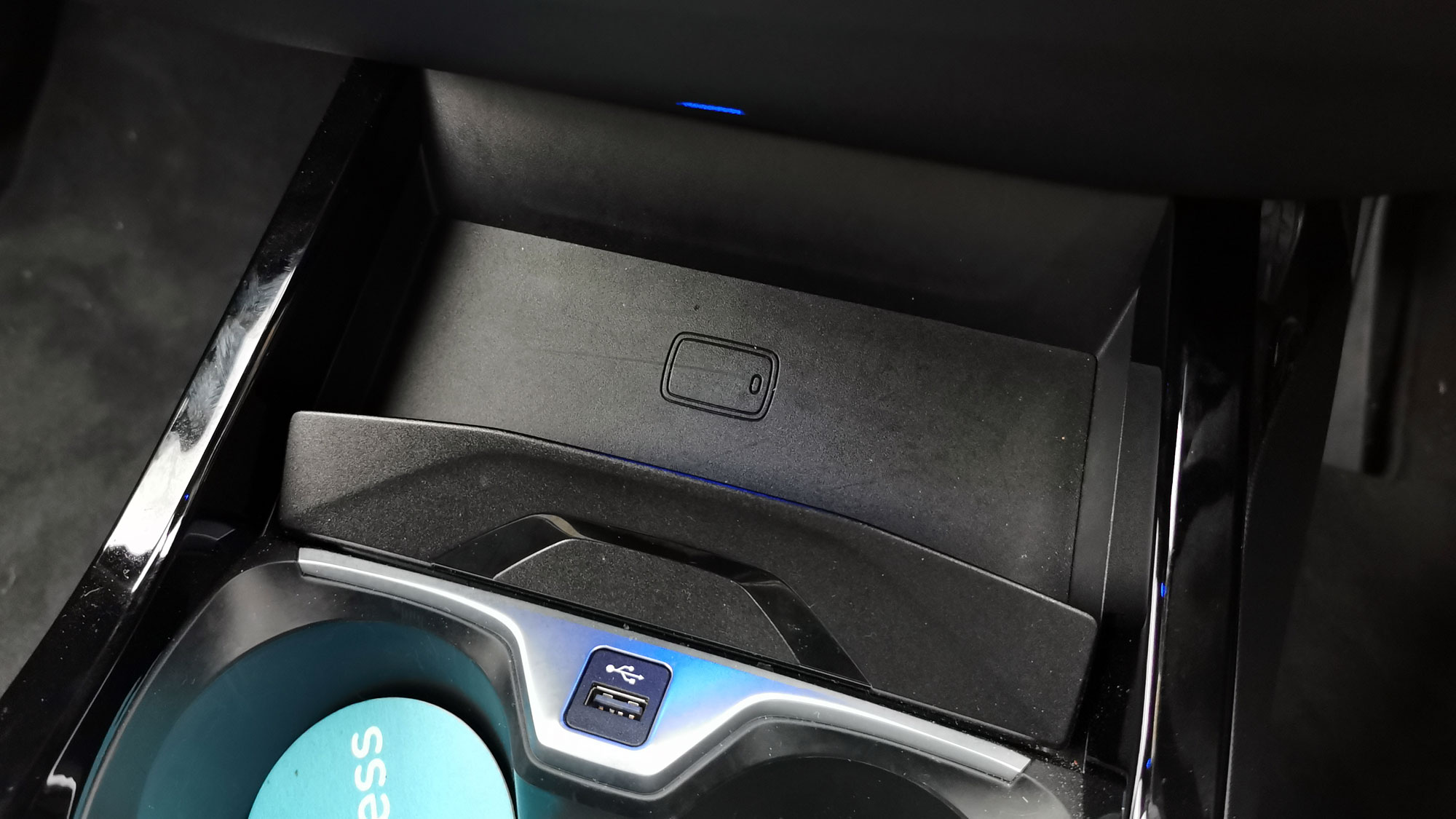 Shifting attention to the large 10.25-inch display in the center console, and we found BMW’s interface to be relatively intuitive, easy to use and responsive.

It’s easy to tap in a destination into the nav (the nav is very good), find a digital radio station or connect your smartphone via Bluetooth which allows you to make and receive hands-free calls, as well as stream music to the 1 Series’ audio system.

If you prefer physical controls, the BMW 1 Series retains the iDrive control wheel by the gear stick, although we found it a clunky way to move around the on-screen options. Most of the time, using our fingers on the touch screen was much quicker.

You don’t have to use BMW’s interface though, as the 1 Series supports Apple CarPlay and Android Auto. And what’s even better is it supports wireless connectivity for these services, which means you don’t even need to dig out a USB cable to use them.

It means you can get your key phone apps – such as Apple Maps, Google Maps, Spotify, messages and more – on the main screen of the car with minimal fuss.

There is another screen on offer too, with an 8.8-inch cluster display behind the steering wheel which feeds you a host of useful information. Speed and revs are there as standard, and there flank the sat nav map which provides clear turn-by-turn directions.

We’re not done there either, as there’s also the option to get a HUD (heads up display) on the 1 Series, which sees additional information projected onto the windscreen.

As you look out the car this information appears to hover just above the hood – not high enough to be in the way, but close enough to your line of sight to safely check your speed or next direction cue. In sport mode, you get a rev bar here as well, allowing you to nail those gear changes.

The steering wheel comes with a complement of buttons, allowing you to adjust volume and skip tracks, as well as change audio input between the likes of your phone and the radio. There’s also cruise control settings on-wheel, which make it easy to set your cruise limit.

Less flashy features, but ones which are certainly useful, include climate control, lane assist, automatic wipers and lights and blind spot warning lights on the wing mirrors – all of which make the BMW 1 Series easier, and less taxing to drive.

When you do manage to wrestle the car into reverse, you’ll find there’s a good quality rear camera to help guide you into places, and sensors all around the vehicle to ensure you don’t have a nasty collision.

If you're willing to splash the cash a little on the optional technology packs, the BMW 1 Series can offer you a vast wealth of features and gadgetry – there's even voice and gesture control options if you're feeling particularly flush.

It's not all about the flashy toys though, the 1 Series also delivers on the road. It's comfortable, quiet and with enough power and precision steering to provide some thrills along the way. 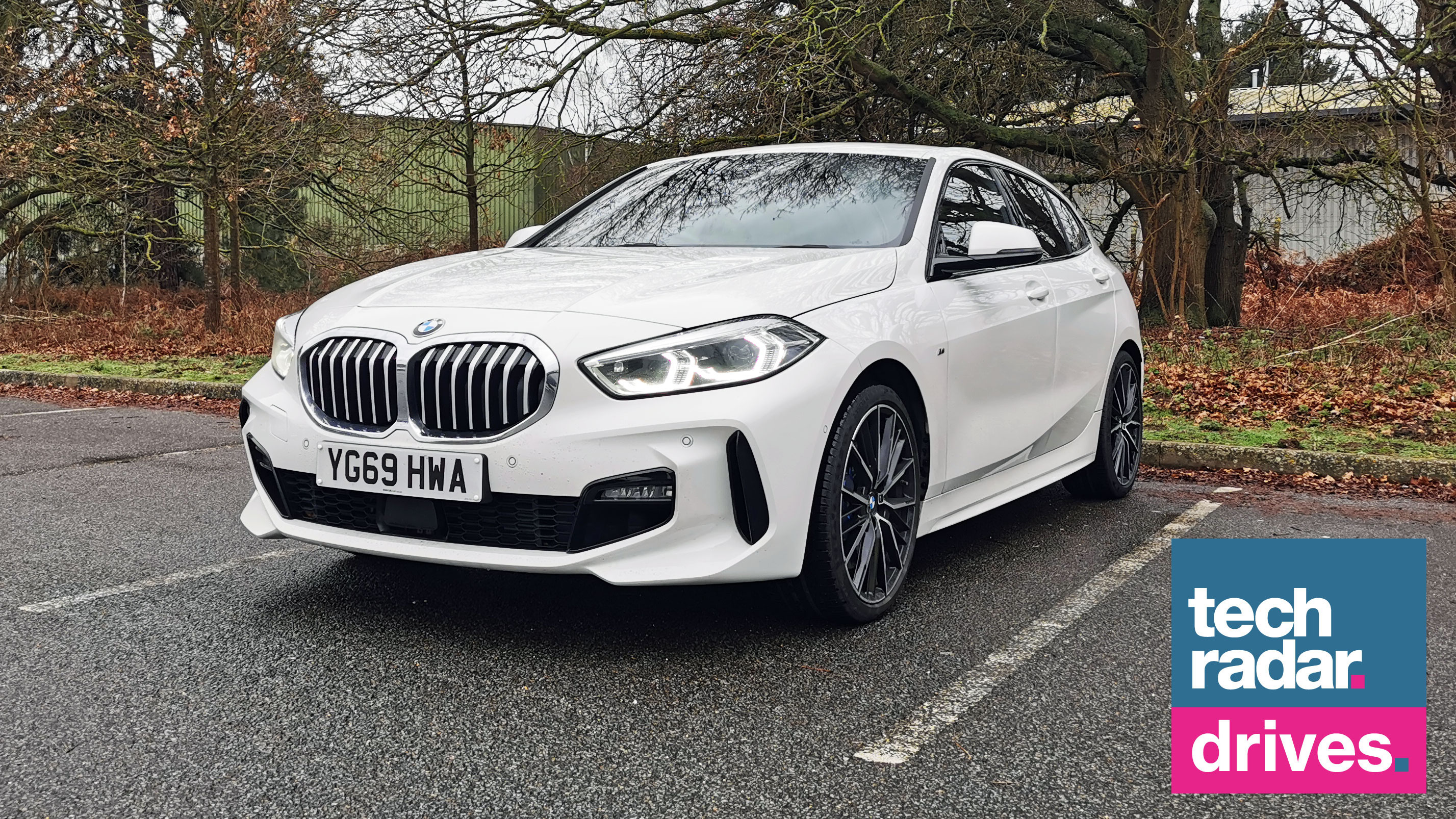